Friday the 13th was a long day! Had a 9:10am flight from DFW to San Diego and actually arrived a little early. My friend Theresa from Odessa had flown out on Southwest and met me at the airport. Theresa and I went on a travel agent trip in 2007 to Costa Rica and have remained friends since. This is an exciting time for us to get to spend together. We took a cab to the pier and were checkin by 10:45am They started letting us board the beautiful Holland America Statendam at 11:30 and we went to the cabin to drop of our bags and headed to the buffet! Of course on our time it was 2pm so we were starving! After eating went back to our cabin and unpacked and got ready for the safety drill. At 5pm they let loose the ropes and we set sail! Our group of 38 met in the Crow’s Nest Lounge for a cocktail party before dinner. I learned from the party that I really like Cosmopolitans! Had not had one before and they are pretty darn good! The group was divided into 3 so we could experience the specialty venues in a smaller group. Our group of 12 dined in the main dining room the first night. The food was very good but I’m not sure what happened but our service was not very good. It wasn’t really bad just slow getting our food. Maybe they were training someone new!! Being we had such a long day after dinner we were beat and headed to the cabin. It was only 8:30pm when I set the alarm clock and I don’t remember much after that!
We had to be at our first seminar at 8am on Saturday morning. Our host Rene’ and Dave are wonderful guys! Great sense of humor that makes the learning easy. Got a good overview of the Holland America Line and learned lots of facts. This ship is very small, only 55,000 tons! Capacity is 1,258! The cabins are huge with lots of storage and there is even a bathtub! If you have not cruised, most have only a shower that is so small you can barley turn around in them! The beds are wonderful! Very comfortable. And the air conditioning works good, our cabin is freezing! Of course it is in the 50’s outside! This afternoon we were given a private wine tasting for our group. We tasted 4 wines and learned about how to do food parings. We had a dinner reservation in Canaletto which is the specialty Italian restaurant. There is no extra charge for dinner in this venue and it was very good. There was a show called Bob Mackie’s Broadway this evening that I attended. It featured 6 people who have been in Broadway productions and they were wearing clothes designed by Bob Mackie. The singers were very good and it was interesting to hear what productions each had been in.
Our 2nd day at sea was action packed. At 10:30am we were given a private tour of the galley. After that we went to the Culinary Arts Theater for a cooking demonstration. That was fantastic and a very neat place. It is set up just like a cooking show with the over head camera and everything! We had a Q & A with some staff members at 1 and then the Future Cruise Consultant before a last session with Rene’. He cut his session short though so we could attend the cupcake tea at 3. The cupcakes were not really cupcakes to me. They were more of a mini muffin. They did have scones also. It was very nice and well attended. Our dinner tonight was in the Pinnacle Grill which was outstanding! Crab cakes were delicious and the shrimp in the cocktail were huge! Some had steaks and some lobsters. All were good and the desserts were outstanding. There is a service charge of $20 for this one but well worth it! We arrive in Victoria at noon and will be out all afternoon. 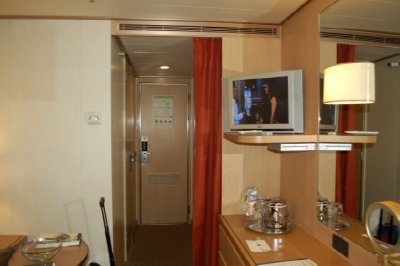 We even had a bathtub! 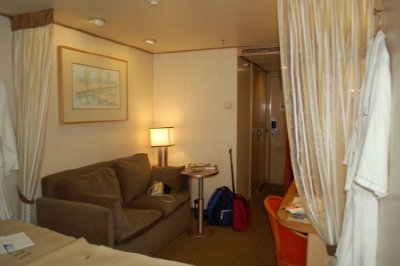 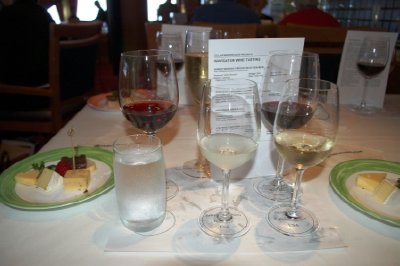 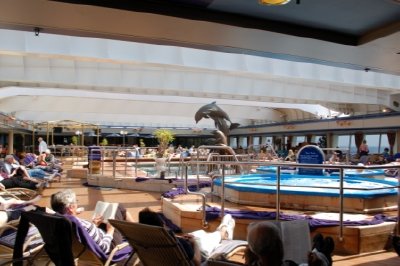 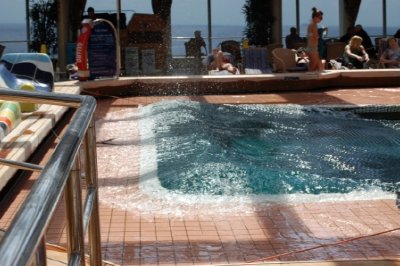 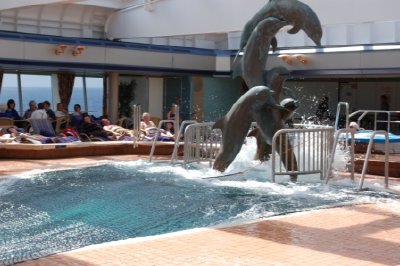 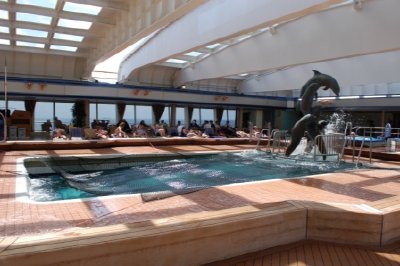 The water was sloushing around in the pool! 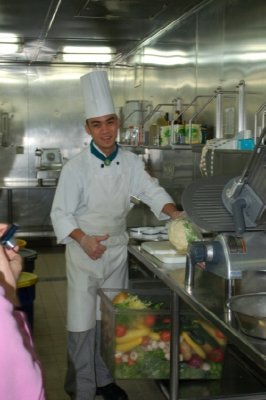 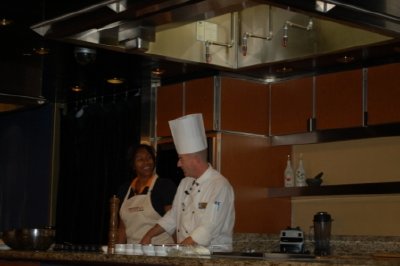 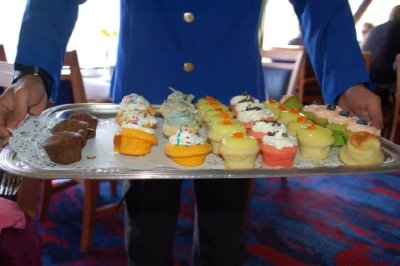 From the cupcake tea