After a good night’s rest in our freezing cabin(AC works great), we were assigned the Character Breakfast this morning, AKA Mickey’s Island Jam Breakfast. Everyone gets one morning to attend and it goes by your dining assignment. So we ate with the same people from dinner and had the same waiters. It is your standard breakfast menu but you have guests!!! Micky, Minnie, Goofy, Pluto, Chip n Dale were there. The characters came by each table and took pictures with anyone who wanted them! Everyone had a great time and it is so cute seeing the kids dressed in costumes.
The Disney Princesses made an appearance today and the line was crazy long! There were 4 of them and they spaced out in the atrium and the cameras were set up for the child to start on one end and work their way thru. Disney was taking the pictures of the kids. Not sure on pricing on that. The shop has all the Princess outfits and accessories but I have been told prices on the dresses are about $20 more than they are at the Disney Store. So be sure and bring them with you! They did have Peter Pan and Snow White(not in Princess outfit) walking around where the kids were lined up so keep them from getting too bored!!
Tonight was ‘Dress Up’ Night. The show was Twice Charmed…it was outstanding!! It was an original twist on the Cinderella Story. So many lines or more of a dance revue, but this one was a show and dance. The kids loved it and participated when asked.
Our dinner tonight was in Parrot Cay. The food was very good. The menu was themed Prince and Princess Dinner. The dishes had names of prince and princess characters. 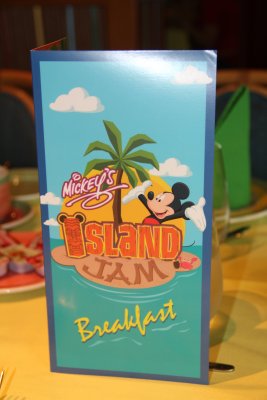 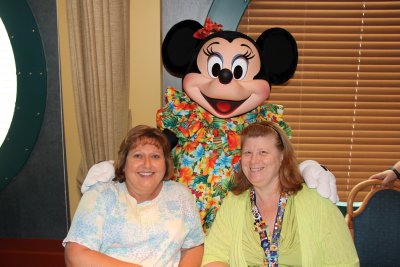 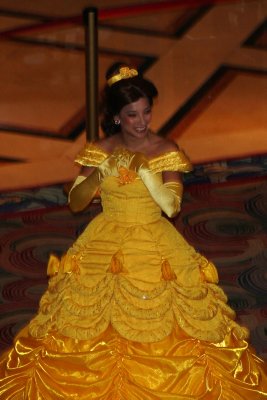 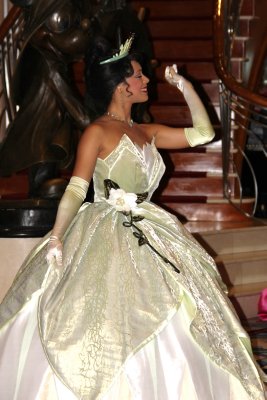 One of the Princesses